Fast and Furious: Hobbs & Shaw - A Spectacular Ride and Worthy of Being Spinoff from Fast & Furious Series 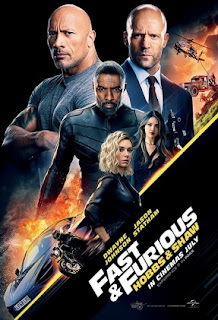 This is one of the most anticipated movie in my list and it was great that the Indonesian cinemas opened advance ticket sales from last week, making me and my wife easier to aim for the studio and time of our choosing. As usual, we would opt to see this kind of movie in a Dolby Atmos theater on its premier date. OK, I would not go into so much detail and get straight to the movie.

When a dangerous virus that could endanger human lives was being targeted by a team of highly skilled ex military led by Brixton (Idris Elba - The Dark Tower, Star Trek Beyond etc), one MI6 personnel (Vanessa Kirby - Mission: Impossible - Fallout, Everest etc) managed to escape the attack along with the virus. DSS agent Luke Hobbs (Dwayne Johnson - Skyscraper, Baywatch movie etc) and Deckard Shaw (Jason Statham - The Meg, Mechanic: Resurrection etc) were asked to capture the agent with the virus.

The problem was Hobbs and Shaw did not work well together especially after what they went through earlier in The Fate of the Furious. But due to the huge threats from Brixton, they must set their differences aside and join in their attempt to save the world.

So how would this end for them? Find them all in this great summer pop corn movie.

Wow that was what I call a hugely entertaining action movie! Even from the start we already got a taste of what would be in store for us. From the moment Idris Elba showed up as a real badass violent villain I was really pumped up with what would happen when he had to face Hobbs & Shaw. And when they finally met, it certainly did not disappoint and truly lived up to my high expectations.

For this kind of movie, the plot would normally be "set aside" a bit and focusing on the action instead, so there was no deep heavy story that we should expect, which did not really matter to me anyway since I was not looking for that element in here. But the movie did have some nice humor. The main attraction was definitely the unlikely partnership of these 2 alphas who could not have been more different. Add a woman into the picture and you got yourself a really fun situation.

Dwayne Johnson and Jason Statham were totally awesome in this film. They both managed to show off their amazing fight skills capabilities where one would use his brute force and big body while the other used his stealth and quick moves. And their banters between each other were also the highlight where we could laugh or at least chuckled seeing how they could not stand one another. Vanessa Kirby was fantastic in here. She really fit in her character of a dangerous, intelligent and experienced agent and her relationship with these 2 males were great. There was also the brief appearance of Helen Mirren reprising her role as Deckard's mom in the previous movies. But the really amusing surprise were the appearances of 2 well known stars in the movie (whose names were not credited likely to provide us this surprise). They provided a bit of comical moments that was for fun.

The action sequence here were totally great. There were so many of them throughout the movie which lasted for 136 minutes including closing credits (which took quite a long time to finish). Btw, there were 2 mid end credit scenes and one post end credit scenes which you could enjoy. But if I had to be honest, I actually felt that the climax action sequence were not as spectacular as the ones in the middle. I really really loved the car chase scene in the streets of London and that Moscow scene were soooo spectacular that when it finished, my wife and some audience clapped their hands a bit and I also breathed sigh of relief. I personally thought that the climax was having a bit of illogical part, but it was ended with some awesome scene. And the Dolby Atmos sound effects were certainly put up to maximum use during the action sequence and the music & songs sounded amazing.

Overall this was the exact definition of entertainment, a really awesome summer blockbuster movie, the type of film for us to come and enjoy at the cinema. The actions may sometime be exaggerated a bit but mostly they were nicely done (especially with a hefty budget of USD 200 millions to make them realistic enough) and should be enjoyable for fans of action movie. There were even some humor for us to enjoy as well.

Due to some crude language and the violence, the movie was classified for 17+ in Indonesian cinemas (though it was rated PG13 in the US which I am inclined to agree). So if you are looking for this kind of movie and want to be entertained with some spectacular action sequence, then this one would satisfy you. But do not expect to see this movie having too many references with the Fast & Furious series as it seemed to try to be independent without having to rely too much on the original. However, if you feel that 2 hours + is too long or you are not fans of this genre, then most likely you would not like this. The choice is yours.

I never claim to be a professional movie critic. This blog only represent my personal view and movie experience. It is not meant to be a truly smart analysis of the feature of the films like script, musical score, acting, directing or any such things, though at certain times I might provide my comments on those aspects. If you are looking for any of that stuff in every post, other blogs may suit you better.